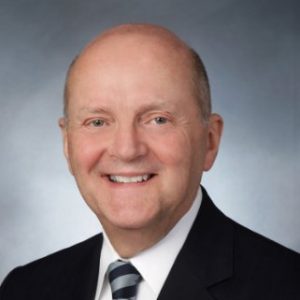 David C. Shonka has been the Acting General Counsel of the Federal Trade Commission since March 2016. He has served in that position twice previously (January – June 2009 and October 2012 – June 2013). The FTC’s General Counsel is the agency’s chief law officer and adviser.  He is also the agency’s Principal Deputy General Counsel. In both roles, Mr. Shonka provides legal services that cover the full range of the Commission’s activities, from appellate litigation to internal operations, including counseling on legislation, ethics, and administrative matters.  He has also personally represented the Commission in numerous district court and appellate proceedings.

What will people at your Agency be confronted with the next 3-5 years– what opportunities/hurdles (especially with respect to Robots, chatbots, Artificial Intelligence, etc.)?

Whether you are addressing record keeping by NARA, focusing agency efforts on IT Modernization, selecting Emerging Technologies for improved Citizen Services or improving IT security, one important common denominator is the need for an appropriate Information Governance schema that is holistic, cross-agency and keeps up with technological capability. Whatever Information Governance an agency has in place (and it certainly varies), there is no question it needs to continually be updated to incorporate all the ways data are being created, shared and stored.

Some recent developments/current events to factor in existing Information Governance processes include:

Modernizing Information Governance means coordination and collaboration with multiple agency stakeholders — to include but not limited to Information Technology, Records Management, Privacy, Security, Data Analytics, Legal, Compliance and, of course, the relevant “Business Owners” who ultimately “own” the data and are responsible for it throughout its lifecycle. This level of cooperation and integration of strategies and implementations is no small feat.

In today’s hyper-connected, always-on world, the ability to access and or create information anytime and from anywhere is the new normal.  Agencies will need to ensure they leverage Information Governance best practices to create efficiencies and to protect government data, which includes citizen data. Information Governance, and its attendant rigor in full lifecycle management, will be critical to delivery of citizen services as well as our national security and competitiveness.

Visit www.digitalgovernment.com to register for webinars and events covering this important topic.

How can agencies navigate all these factors even if resources are constrained and budgets may be cut? Digital Government Institute has partnered with Veritas to help industry and government come together to generate solutions during this transition.

The 2017 Playbook for Federal Records Management provides a step-by-step approach to managing records electronically. The goal of this playbook is to enhance agency best practices in electronic RM, by providing some specific steps agency personnel can take to make headway on the journey to electronic RM including:

This playbook also provides a clear roadmap to compliance with the 2012 Managing Government Records Directive to electronically store all permanent government records by 2019. It also includes:

REGISTER to receive your copy

Philip Droege is an interesting guy—with an even more interesting job.He’s the Director, Office of Records Management for the Executive Office of the President EOP. Which means two things:

Philip lead a session with Jason R. Baron, former director of litigation at the National Archives and Records Administration (NARA), during the inaugural Records Management Conference at 930gov on August 24, 2016. They spoke on “Presidential Transitions and Exit Procedures for Departing Officials,” covering what happens when the entire senior leadership of the U.S. Government packs up and leaves town.

You probably know that on Inauguration Day, it’s traditional for the president and president-elect to ride together from the White House to the ceremony at the Capitol. As the incumbent walks out through the North Portico, it’s a bittersweet moment—for the simple reason that he or she will not return that day and perhaps not ever.

And as soon as the limos sweep out of site, an army of movers attacks the residence on the third floor. All of the outgoing family’s belongings are packed into vans and are replaced by those of the new first family. When the new first family arrives, their new home will be ready for them.

The White House load-out and load-in is a tiny part of a far larger transition between the old and new administrations. As many as 1800 people work in the Executive Office of the President  (EOP) and the vast majority of those in White House components will be leaving.

According to Jason, an advocate for information governance, what they have created and will leave for NARA to own  is an enormous mountain of presidential records, including:

For political appointees at federal agencies, the rules are different. Only some records series in agencies are organized by administrations, Jason says. In other words,  a cut-off date when those records must be sent to a records center may differ from the date one administration ends and another begins.   Other internal records will be subject to an agency’s own policies regarding preservation or disposal, in accordance with the Archivist’s determination of when they will no longer have administrative, historical, informational or evidentiary value.

As a change in administration approaches, Jason recommends that departing officials follow NARA guidance and prepare thoroughly to make an “intelligent hand-off” by:

We’ve seen in the news that senior officials can generate tens if not hundreds of thousands of records. Waiting until the last minute to sort and prepare all that material will make for a big, ugly job. To avoid the rush, Jason recommends officials adopt these operating principles from the first day they walk into their new offices:

Ideally, for most officials, the day-to-day burden of records management will be almost invisible. But taking a few simple steps can save a lot of time and keep you out of trouble—especially with new laws covering emails.