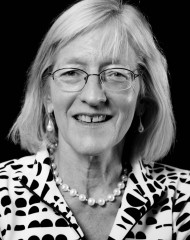 The Honorable Elizabeth Laporte Latest Judge to Present at DGI

Over the years, Digital Government Institute (“DGI”) has had the privilege to hear from a variety of luminaries from the Judiciary, including Judges Facciola, Lamberth, Peck and Francis. DGI is delighted that United States Magistrate Judge Elizabeth Laporte from the Northern District of California[1] will be participating (March 22nd) in its 15th Annual E-Discovery & Records and Information Management Conference.

Appointed in April 1998, Judge Laporte presides over civil (patent, trademark, copyright,[2] business litigation, employment, civil rights, etc.) and criminal cases.  Judge Laporte has participated in dozens of educational programs, worldwide, regarding patent litigation, e-discovery, jury trials, etc. and is considered one of the top judges in the country with respect to e-discovery.

Even before the (December) 2015 updates to the Federal Rules of Civil Procedure,[3] Judge Laporte expected “parties to take responsibility for efficient discovery. She reflected [at a LegalTech event] that justice cannot be carried out if litigation is too costly, and most discovery occurs outside the supervision of the court.”[4]  Shortly after the Rules Amendments took effect, she emphasized “parties’ duties to cooperate under Rule 1 to ensure the just, speedy and inexpensive determination of every case, and to achieve proportionate discovery under Rule 26 that facilitates a just determination on the merits.“[5] The Northern District of California E-Discovery (ESI) Guidelines & Checklist[6] cover, inter alia, Cooperation, Discovery Proportionality, Preservation, Meet and Confer, etc. Guideline 3.01 (Judicial Expectations of Counsel) details what Counsel should be familiar with, to wit, discovery provisions of the Federal Rules of Civil Procedure, The Advisory Committee Report on the 2015 Amendments, the Court’s Guidelines, as well as the Court’s Checklist.[7]

The hottest topics in E-Discovery are Preservation, Proportionality and Technology Assisted Review (and other applications of machine learning and artificial intelligence to large data sets). Preservation of Electronically Stored Information (“ESI”) has always been challenging (for both the private and public sectors) due to the rapid proliferation of technology, communication channels and data itself. Government is obligated to manage/produce its ESI (including within the FOIA context) in the same way the private sector is (sometimes, with fewer resources). Records and Information Management is foundational to enabling the Legal Office of Agencies and other government entities to meet its litigation, investigation and FOIA obligations (and to do so in a timely manner). Join DGI March 22nd to learn more about these topics, including during the Fireside Chat with Judge Laporte.

[2] The work Judge Laporte and former US District Judge Martin Jenkins did defining the boundaries of property rights and contractual rights in the licensing of digital works was so important, they are credited with the “Jenkins-Laporte doctrine.” https://en.m.wikipedia.org/wiki/Jenkins–Laporte_doctrine.

[3] Summary of December 2015 Amendments to the Federal Rules of Civil Procedure (December 7, 2015) https://www.orrick.com/Insights/2015/12/Summary-of-December-2015-Amendments-to-the-Federal-Rules-of-Civil-Procedure.

Every year, we recognize professionals who take customer service to the next level in some of the most challenging environments in government. But as I’m looking at the list of winners and finalists, a question occurs to me: What is great customer service—or to put it in more modern parlance, what goes into delivering a great customer experience?

Great customer experience is both an art and a science

I think it’s important we define and quantify great customer service. Which means we need to think about who defines it. If you were to ask customers what specifically constitutes great service, they’d probably tell you as the late Supreme Court Justice Potter Stewart once wrote in opinion, “I can’t define it but I know it when I see it.”

Ask someone responsible for customer service in an agency and they might refer you to something akin to service level agreements—responding to inquiries within a specific amount of time, resolving issues during a single contact, and other performance metrics. They’d also point to customer satisfaction scores.

These two vantage points define two axes of great customer service. On the one hand, service quality is subjective and ineffable; it varies from situation to situation; customers know it when they get it. On the other hand, service quality has to be quantifiable as goals, activity, and results so you can build process around it, measure it, and replicate it.

When you think about it though, both of these perspectives depend on the same thing: an intimate knowledge of who your customers are and what they hope to accomplish as they interact with you.

My definition of great customer service

I’d offer this definition of a great customer experience: It’s what happens when customers encounter an organization or agent that is fully prepared, equipped, and empowered to answer their questions, requests, and needs.

A lot goes into making this happen but it starts with listening. Very careful, very active listening.

Then they take the action customers are actually looking for. In this way, great service can be unexpected and surprising because it addresses what customers really need, not just what they think to ask for.

Organizations have to be great listeners, too

It’s one thing to listen to a customer on a call, treat them with grace and respect, and help them resolve their issues. People who can do that day in and day out are heroes. But it’s another thing entirely for an organization to enable that sort of heroism as standard operating procedure.

When you hear the stories of this years’ winners at  930gov , you’ll meet some organizations that do this well. Every case involves listening to a group of customers, then doing some hard thinking about what great service really meant to those individuals in those situations.

I recommend listening very carefully to what they have to say.

The 2016 winners and finalists—as well as all the agencies who were nominated—are all committed to leadership in a complex and challenging field. I encourage you to set aside the time to attend Digital Government Institute’s 2016 Customer Service & Experience Conference and come “listen” to the 15th annual Government Customer Service Excellence Award winners and finalists on  Wednesday, August 24  – you will be glad you did. 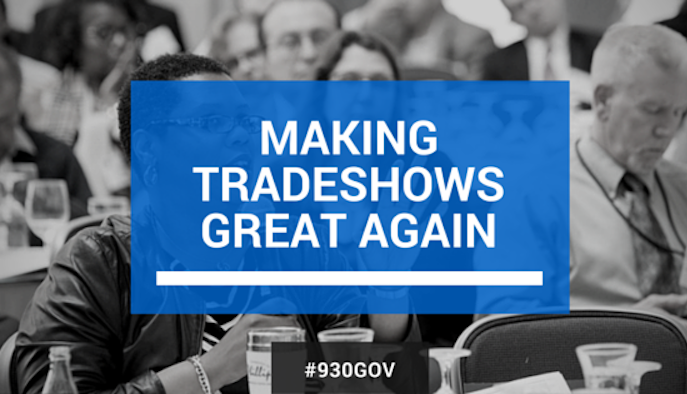 Thirty years ago, the live event government marketplace was a completely different realm. Back then, great tradeshows stalked the earth and the apex predator for federal marketing dollars was an annual “Tradeshow and Conference” filling the prior Washington Convention Center multiple times each year.Fast forward to the present and it’s a very different epoch. The apex predator “Tradeshow and Conference” of old is extinct, with not even a single fossil remaining. Today, the government market calendar abounds with a profusion of small mammals—variously known as single vendor “Summits” or single solution conferences held in hotels and related meeting space throughout the DC metro area—with multiple events scheduled virtually every day of the business calendar.

So what happened to the great tradeshow?

Unlike the dinosaurs, the great government “Tradeshow and Conference” wasn’t done in by a single cataclysmic event—such as the advent of the Internet. Rather, large tradeshows were diminished by smaller factors including: lack of focus and management attention, mergers and acquisitions, and greed. Combine that with the inability of established tradeshows to adapt to changing market dynamics resulting in declining attendance. Meanwhile, tighter ethical guidelines and government travel restrictions made attending multi-day, large horizontal events risky.

But more than anything else, the scale and complexity of the challenges government agencies faced grew beyond the plausible scope of even the grandest tradeshow. Thirty years ago the large government tradeshows were focused on products; vendors used the event to announce new products and services. At a time when agencies were trying to stand up local area networks, connect network printers, and get email to everybody, it made sense to convert the convention center into a giant, one-stop mall for IT products and related services.

With Moore’s law in full effect, computers and other IT products were improving dramatically from year to year justifying annual participation. The large tradeshow enabled buyers to see, touch, and try the full range of their IT options, all in one place, all at one time—it was a win-win for both agency personnel and vendors.

But over time, the focus shifted from the desktop, beyond the LAN, to the enterprise and beyond. Products that were once innovations became commodities. Today, few IT leaders are going to leave their office to address challenges that can be solved by purchasing a product. They can jump online, investigate and click “Buy.”

As the emphasis shifted away from products with vendors using other media formats to make new product announcements, the large events started to decline in exhibit space and attendance. Instead of updating the tradeshow format, show organizers stuck with the old formula of trying to be everything to everybody—using taglines like ‘Technology Unites Us”—leading to lost exhibitors and attendees. The same goes for hard-pressed publications scrambling to replace declining magazine advertising revenue. The transition from an industrial economy to the information based economy continues to destroy many prior successful business models.

Split off from the mammoth-sized exhibition, in the past 15 years “small mammal” sized events filled up the event calendar (small mammal event defined as a one day/ half day solution specific events). The value of these events vary greatly with multiple alternatives happening each week or in some cases the same day. Unfortunately, many are just elaborately concealed sales pitches.

So how can the classic tradeshow be revived? Should they be revived? The answer is definitely “yes” but only if the tradeshow evolves into a new form and format. Tradeshows must move away from broadcasting information vendors want to convey to building communities, and start facilitating conversations agency professionals want and need to hear. To be of any great value, tradeshows must essentially become a dynamic form of live, in-person social media. 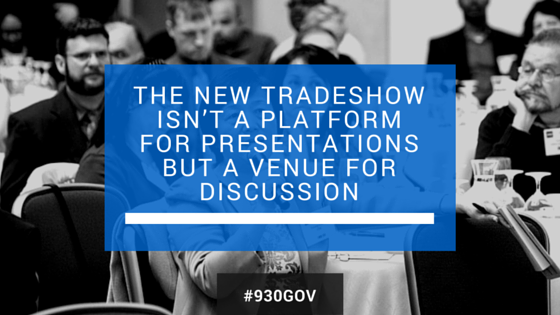 The new tradeshow is a platform and venue for gathering communities of interest for discussion and networking. It’s where professionals can gather to engage with one another as well as with subject matter—with ample time for deeper dives, face-to-face networking, and nuanced conversations that are difficult to replicate online.

To function in this way, tradeshows must be organized to support the ongoing work of government technical communities. The work goes on every day, all year, in all sorts of ways, in all different agencies. The new tradeshow exists to summarize and surface all of that work for review and discussion among the community as a whole. Following the tradeshow, now armed with up-to-date, holistic perspective, the community can get back to work equipped with new ideas to tackle another year.

The new tradeshow is part of the process of advancing the work. Which means the content, speakers, and formats must be curated by someone who is intimately familiar with the people, projects, and subject matter that truly matter within technical communities. The result of that familiarity is the essence of the new tradeshow: specific, contextual, and relevant. Sustaining that relevance over time is the primary qualification for greatness.

A great tradeshow is one that consistently delivers great value and can adapt to the constantly changing environment.

In this way, tradeshows can resurface and be great once again.